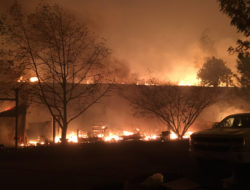 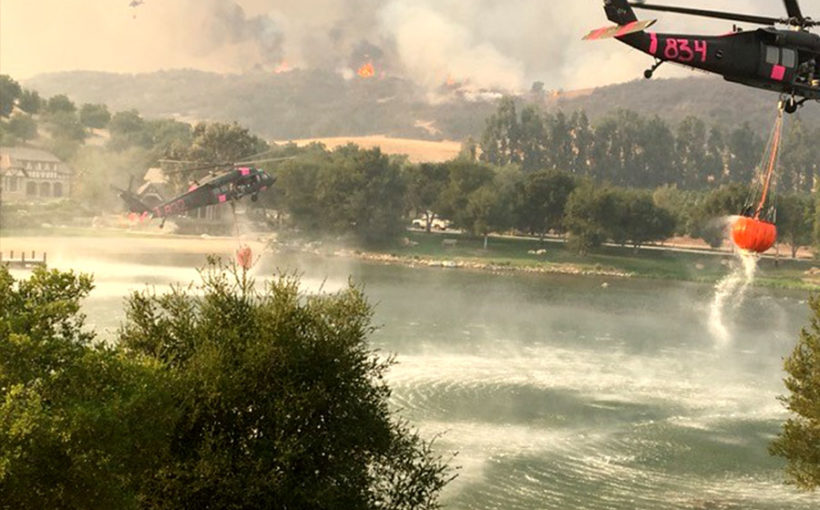 March 1, 2018 Comments Off on Jurgen Gramckow – Stories from the Thomas Fire Views: 3163 Farmers and Ranchers, People

It only took the helicopter 3 minutes. From the shore of his irrigation reservoir, Jurgen Gramckow watched it swoop toward the water, creating a ring of white spray beneath it as it quickly lowered a large bucket holding hundreds of gallons on a long line beneath the surface. With the bucket filled, it pulled up, heading toward the distant ridgeline, already silhouetted by the flames of the Thomas Fire. In the distance, he could see the plume of water as it dropped and the now small speck of the helicopter swinging back toward his lake in a long arc. In 3 minutes, it was back where it started above the lake, lowering the bucket again.

In the time it took for the one helicopter to make the round trip to the ridgeline and back, a series of other helicopters had already made the same journey, strung out in a line as they dropped 100 buckets in the span of an hour in an effort to halt the progress of the Thomas Fire. They were Blackhawk helicopters piloted by military personnel, a critical component of the concerted effort to protect homes as the fire swept through Ventura County.

The man made lake they were using was designed by Jurgen to serve as a water supply for his farm and a beautiful setting for his house, which lies north of Lake Casitas outside of Ojai. It sits at the far end of his fields, planted in row crops and orchards. The 100 acres of plowed land lay between the community of Rancho Matilija to the south and the ridgeline where the fire swept along. They ended up serving as a protective barrier for Rancho Matilija, preventing a large fire front from forming and threatening the community.

Jurgen had never expected his home and farm to be the base of operations for a massive firefighting effort. Back when he first built the lake, he thought little of it when he gave the county permission to use it as a water source in the event of a wildfire.

Now, in addition to the fleet of helicopters circling his farm, he had a fire captain stationed at his house, part of a strike force from Escondido sent in to battle the Thomas Fire. Later, 5 crews from Torrance would come through with a pumper truck.

By the Sunday of the fire, they were knocking out burning remnants. The fire had swept through so quickly that there were still areas left unburnt. These areas posed a danger of creating new flareups and trapping fire crews who were battling the fire further ahead.

Jurgen’s property proved an ideal resource for battling the fire. Not only did he have a plentiful and nearby source of water for firefighters to use, his agricultural lands acted as a natural protective barrier. It gave a defensible space for fire crews to stage operations. It also prevented the fire from endangering the nearby homes, creating one less area for the already stretched thin fire crews to worry about. 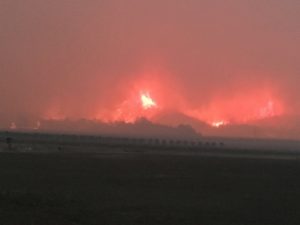 When he bought the farm, he had only wanted to grow crops and find a place to build his house. In the end, his farm played an essential role in protecting his community and fighting the largest wildfire in California history.